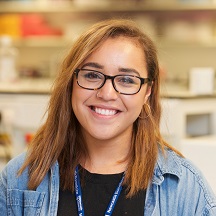 I completed my undergraduate degree in 2016, graduating from the University of Sheffield with an MBiolSci in Biochemistry and Genetics. During that time I completed two laboratory projects; the first with Dr Dan Hampshire investigating whether ‘neutral’ von Willebrand factor gene variants were causing von Willebrand Disease by disrupting splicing. The second project was with Dr Steve West generating CRISPR-Cas9 cell lines in which RNA processing factors were able to be rapidly and reversible degraded using an inducible degron.

These projects reflect my primary scientific interests, which are gene expression and RNA processing, and how defects in these processes can contribute to disease.

My project aims to develop and optimise an RNA Fluorescence In Situ Hybridization (FISH) protocol, in combination with expansion microscopy, to visualise the distribution of RNA within sub-mitochondrial compartments. This technique will study RNA localisation, quantity and the proximity of transcripts encoding translation products that contribute to the same OXPHOS complexes.

Expansion Microscopy (ExM) is a recently developed technique that essentially inflates the sample, thereby increasing the distance between particles. The expanded sample can then be used to investigate the positions of proteins relative to one another, or in the case of my project, of RNA species. ExM enables super-resolution images to be generated using diffraction-limited microscopes. By pairing this technique with single-molecule RNA FISH, we intend to enable visualization of RNA and its association with structures with nanoscale precision.

Furthermore, in collaboration with the Newcastle University Bio-Imaging Unit, super-resolution microscopy techniques will be performed on the ExM RNA FISH samples to generate images with thus far unprecedented resolution.