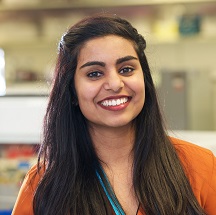 My scientific background comprises of a BSc in Biochemistry and an MSc in Neuroscience, where both research projects undertaken investigated biological mechanisms within neurodegenerative diseases. Following this, I am now pursuing a PhD, which involves investigating mitochondrial trafficking in Parkinson’s disease (PD). I am very passionate about this field of research, as it entails intricate mechanisms in the affected brain regions of PD, which are yet to be understood. Observing mitochondria in this manner, I believe, may be a possible method by which treatment can be developed for Parkinson’s disease and those who are affected.

Investigating mitochondrial trafficking within dopaminergic neurons in the substantia nigra

Parkinson’s disease (PD) is the second most common age-related neurodegenerative disorder. Though the causes of the neuronal death in PD is still not clearly elucidated it is believed that dysfunctional mitochondria is a crucial component. There are two hereditary forms of early onset recessive PD that arise from mutations in the genes PINK1; a serine/threonine kinase and Parkin; an ubiquitin E3 ligase. These genes are thought to alter mitochondrial morphology, movement and mitophagy. This project will aim to observe the movement of mitochondria within the dopaminergic (DA) neurons of the nigrostriatal pathway in the substantia nigra, which is the brain region most affected by PD. This will be done via stem cell cultures and mice models, by looking at PINK1/Parkin interactions.