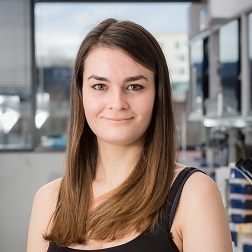 I joined Newcastle University in 2015 as a PhD Candidate in the Wellcome Trust Centre for Mitochondrial Research at the Institute of Genetic Medicine.  Prior to this, I graduated from Imperial College London and the University of South Wales with MSc Human Molecular Genetics and BSc Human Biology, respectively.

My primary research interests are the role of genetics and epigenetics in modulating disease phenotypes, particularly those which arise as a result of the complex interactions between the nuclear and mitochondrial genomes.

Leber Hereditary Optic Neuropathy (LHON) is a debilitating disease which causes loss of retinal ganglion cells within the central retina and degeneration of the optic nerve.  Patients develop acute blindness and quality of life is greatly affected. I have characterised patients’ primary fibroblasts to quantify a range of cellular processes, such as respiration and calcium regulation.  Further, mitochondrial copy number – which has been linked to disease pathogenesis – has been measured. LHON is further characterised by reduced penetrance and a marked male bias.  There is strong evidence that environmental factors, in particular smoking, modulate the phenotypic expression of the mtDNA LHON mutation. As such, I determined global DNA methylation in a cohort of LHON patients and unaffected carriers to produce a list of candidate genes which were differentially methylated between the two groups.  This highlights disease pathways that could contribute to RGC loss in LHON.