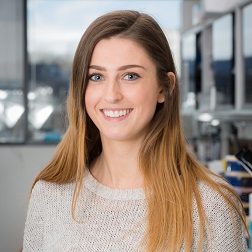 I completed my BSc undergraduate degree at the University of Leeds, graduating with a first class (hons) in Neuroscience. During my studies I developed a keen interest in neurodegenerative diseases, namely Parkinson’s disease and became particularly interested in the underlying pathoetiology and pathogenesis. I am now in the second year of my PhD, investigating the impact of mitochondrial DNA variation in neurodegenerative diseases, with a major focus on Parkinson’s disease.

Investigating the role of inherited and acquired mitochondrial DNA variation in neurodegeneration.

The aim of my research project is to investigate the role of mitochondrial DNA (mtDNA) variation in neurodegenerative diseases, namely Parkinson’s disease (PD). Previous research shows that particular mtDNA variants (haplogroups) can protect from or increase the risk of developing PD. I will explore this by investigating the effect of inherited mtDNA variation on mitochondrial transcriptomics in different brain regions from PD patients.

Furthermore, mtDNA has been found to exist cell-free within human body fluids, coined circulating cell-free mtDNA (ccf-mtDNA). Ccf-mtDNA copy number has been found to be depleted in both PD and AD CSF, suggesting this may be a biomarker of broad neurodegeneration. My project will encompass a broad clinical spectrum including PD, AD, Dementia with Lewy bodies and Multiple Sclerosis. I will assess the function and integrity of ccf-mtDNA within the CSF to better understand how it may contribute to the development and progression of neurodegeneration.